I can guarantee that the new European travel ban was not driven by the public health experts. If it did advance the cause of public health (which it doesn’t) the numbers suggest that a Washington State travel ban would make more sense. The table below lists the Covid-19 mortality rate for every country included in the ban along with the US and the UK. Note that the 18 of the 26 countries on the list have mortality rates from Covid 19 that are LOWER than those in either the UK or the US, which both happen to have almost exactly the same rate. So, strictly from a numbers perspective, the ban makes almost no sense for any of these countries with the possible exception of Italy, which has already shut down travel. At a stretch, you could possibly justify Spain, but not by much. Half of these countries, with zero deaths to date, could justify banning travel from the US by these criteria.

Now take a look at Washington State. Our mortality rate, at 0.478, would put us at #2 on the travel ban list. In other words, if travel bans were effective, it would make more sense to ban travel from Washington than from Europe. Hopefully, I am not giving anyone any ideas.

Note that I have used mortality rates rather than disease prevalence rates. That is because those rates are almost meaningless in this context because they depend so heavily on screening rates. The abysmal screening rates in the US might make us look good compared to European countries, but no credible epidemiologist would compare prevalence rates based on current data.

One other note on the previous travel ban. Like the current travel ban, this one allowed US citizens to travel from these forbidden countries. During the course of the Chinese travel ban, a 35 year old American citizen traveled returned home from Wuhan. He had not been to the food market thought to be the source and, to his knowledge, had not been around anyone sick. He was not tested or quarantined. Within a week, he was case #1 in Seattle. 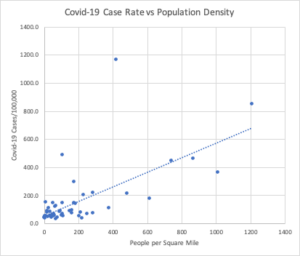