As WHO walks back the message that made it into the press yesterday concerning “asymptomatic disease” it is interesting to look at how that debacle unfolded and what it really means. It took poor messaging, sensationalistic headlines, and soundbite thinking to create controversy and confusion where none needed to exist. Everyone is at fault. Including us.

The problem started with a muddled question at a WHO press conference by Reuters Reporter, Emma Farge.

It’s a question about asymptomatic transmission if I may, I know that the WHO’s previously stated that there’s no documented cases of this. We had a story out of Singapore today saying that at least half of the new cases, they’re seeing have no symptoms. And I’m wondering if it’s possible that this has a bigger role than the WHO initially thought in propagating the pandemic…

Here is the key piece of the response from the WHO epidemiologist, Dr. Maria Van Kerkhove:

We have a number of reports from countries who are doing very detailed contact tracing they’re following asymptomatic cases. They’re following contacts and they’re not finding secondary transmission onward, it’s very rare. And much of that is not published in the literature. … It still appears to be rare that an asymptomatic individual actually transmits onward.

Let me translate. What she was trying to say was that very few people who get infected have absolutely no symptoms. They might have very mild symptoms, but it seems to be rare for them never to have any. And, when we follow those few people who never develop any symptoms, very few of them ever transmit the disease to others. That’s what I get when I read this, but only because I know the secret code. I know that she is making a distinction between mildly symptomatic, presymptomatic (hasn’t yet developed symptoms), and asymptomatic (never going to develop symptoms) cases. She is making a distinction that was lost on an audience of science reporters and completely opaque to the public. Someone on the street who is infected without obvious symptoms might have a headache and a slight fever, might have no symptoms but be on the verge of developing them, or might never get symptoms. The fact that the first two could give us a deadly disease and the third one rarely will, is an absolutely irrelevant distinction to anyone simply trying to stay healthy.

Within hours, the CNN piece was making the rounds on social media. Coronavirus spread by asymptomatic people ‘appears to be rare,’ WHO official says, blared the headline. For those curious enough to get past the headline might have read to the lede. “The spread of Covid-19 by someone who is not showing symptoms appears to be rare”. That sentence fully captures the misinformation that confused millions by completely doing away with the already misleading word, “asymptomatic”. It gave the distinct and profoundly inaccurate impression that everything we had been hearing about transmission was wrong.

Someone intrepid enough to wade through the entire article might get a more complete impression, but we are a headline culture. Reading in 2020 is a first paragraph affair. And few of us read at that depth. Most only made it through the misleading headline.

So, everyone was at fault. It started with Dr. Van Kerkhove, who seems to be a highly trained and experienced epidemiologist, but she must have been exhausted. She failed on some of the major bullets in the CDC field manual on how to communicate about an epidemic. Specifically:

She failed to clarify a definition that was critical to her point. She said something that seemed profoundly reassuring, but it shouldn’t have been. She didn’t clarify how much we don’t know about this. And she didn’t anticipate how this would play.

The reporter failed to capture the subtle differences that were buried in the WHO comments and the headline writer blew up that misperception in large, bold letters. The media ceases to exist if they don’t grab eyeballs and they looked for the words that would do that.

We, in turn, jumped on the bait. I include myself as someone who read the headline and thought I understood the story. I was wrong.

The reality is that this virus and its disease are maddeningly complex and good information is hard to come by. The WHO retracted today, but the damage is done. Myth information is everywhere. What can we do?: Approach surprising news with caution. 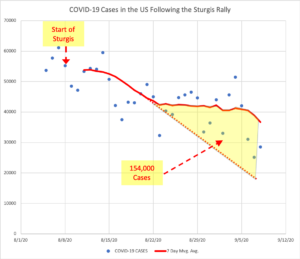