Martin Kulldorff calls it “absurd that the WH pandemic plan mandates vaccines for low-risk working-age people”. In making that claim, he demonstrates a shocking, inexcusable, and deadly ignorance of the history of vaccination in public health. Together with health economist, Jay Bhattcharya, Kulldorff has already attacked the vaccination of teens and young adults as “unethical”. Even if we ignore the 3,455 deaths in the United States in that age group, the moral calculus behind vaccination of all age groups, including young children, is irrefutable and stands on strong historical precedent.

In demonizing vaccines for the young, Kulldorff and Bhattcharya point to paper describing inflammation of the heart following vaccination. Their reference is a report of 6 cases of myocarditis among the 4 million people receiving the vaccine in Israel. The paper notes that“the clinical course was mild in all six patients”. For people under 30, the risk of dying if infected is more than ten times the risk of these mild events. For people between 30 and 65, the risk of death if infected with COVID is more than a thousand times the risk of an adverse response to the vaccine. So, even from the narrow perspective of protecting the person receiving the vaccine, the benefits dramatically outweigh the risks.

And that’s not even the best reason for universal vaccination.

The forgotten story of vaccinations

There is a clear, long standing precedent for the use of vaccines in children to protect other population groups, even when the risk to the child is small.

Older readers may remember the miserable itch of what we called German measles. For me, it meant a few days in bed covered in calamine lotion, watching bad daytime television. I was part of a national epidemic in the 60’s that caused over 12 million cases. Deaths? I searched the medical literature and was able to find just one case report of a single death. Yet almost every infant in America is vaccinated against this disease as part of the standard MMR (measles, mumps, rubella) vaccine. So, COVID is almost 200 more likely to kill an infected child than a vaccine at the core of the CDC schedule for over 50 year.

Why? Children are vaccinated against rubella not to protect the child, but rather to protect adult women. More specifically, it prevents the infection of pregnant women, In the embryo or fetus, rubella causes severe congenital malformations, spontaneous abortion, and death of the infant. Vaccinating children to prevent spread among adults is not new or radical. It’s old school public health.

long term effects matter: but the critics get it backwards

Kulldorff and Bhattcharya warn that “we will not know enough about rare but serious adverse reactions until a few years after vaccine approval”. This may be true, but their sin is an astonishing omission. COVID-19 did not exist two years ago. We already have evidence of its long-term consequences and have absolutely no idea about its effects beyond two years. We routinely vaccinate against two infections, varicella (chicken pox) and hpv because of their long term consequences. Varicella causes hingles and HPV (human papilloma virus) causes cancer.

In other words, these arguments against vaccinating younger populations against COVID-19 are profoundly flawed. They completely ignore the rationale behind existing vaccines. Instead, Kulforff and Bhattcharya are throwing the weight of their Harvard and Stanford credentials behind flawed, uninformed, and deadly arguments. As a statistician and a health economist, perhaps one shouldn’t be surprised that they don’t know the epidemiology, but it appears that they didn’t even get the math right. 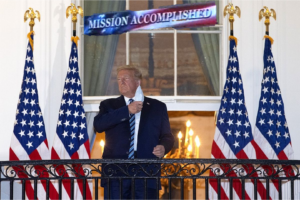 We Are Not Out of the Woods. Neither is Trump

Is Trump Setting Up the Medical Community to Take the Fall for the Economy?