A new report suggests that runners may pose a special risk of exposure to the SARS-CoV-2 virus, especially for those running near them. Researchers in Belgium and the Netherlands looked at how the unique aerodynamics of runners increase the effective range of any droplets they might be producing and the risk that might pose. How worried should you be?  Let’s break it down.

The elegance and complexity of the computer model reflects a simple underlying concept that doesn’t require gorgeous graphics. Think of it this way. If you talk loudly or breath heavily, you emit droplets, but the bulk of them would hit the ground within about six feet of you. However, if you imagine emitting a droplet and then running ten feet while it is falling, you will be 16 feet away when it hits the ground. The fine details of the air currents around a runner propel it even further, but the basic idea is that being six feet behind a runner is too close if they are emitting the virus. Six feet to the side or six feet in front is not a problem. Running with someone who has been in lockdown with you for three weeks is also not a problem.

Then there is the question of dose, which plays a key role in determining the extent and severity of a viral infection. Inhaling a single virus or even a hundred of them floating through the canned goods section of Safeway will not make you sick. Animal studies suggest that symptomatic disease requires somewhere between 70,000 and 2.5 million active viral particles for you to become infected with SARS-CoV-2 (note that the term, viral particle, refers to an intact virus and the modifier, active, means it is capable of causing an infection). The greater the dose, the more severe the infection. To be clear, 2.5 million particles could fit in a drop too small to see, but a study from Nebraska found that the air next to a Covid-19 patient who was not coughing contained an average of 7 viral particles per liter and even those were not active in cell culture. Inhaling 70,000 of them would require about 20 hours of breathing contaminated air. This is why health care workers are at risk. It even explains why people who work in retail need protection. It explains why living with someone who is infected could put you at risk. But the notion that you are at risk because someone with an asymptomatic infection exhaled four feet away from you needs to be taken out behind the barn and shot. Forget it. It is not happening.

At the other end of the spectrum, we have the tragedy of the Skagit Valley Chorale rehearsal in which an infected member released enough copies of the virus in the course of two hours to infect a majority of those present. Singing, like coughing, propels particles with enough force to allow larger droplets to reach others. The dose goes up, the duration of exposure required for infection goes down and you have disaster. If the droplets are large enough, it might take only one to infect you. That is why infection control has focused on droplets and not aerosols.

Which brings us back to the risk of the trailing runner. This may be a case where the model underestimates the problem by not taking into account biology.  Because a runner is breathing hard, maybe even coughing from exertion, they are emitting far more droplets with more force than a resting person standing ahead of you in the checkout line. Furthermore, if you are running as well, which you must be to stay behind them, then you are breathing hard through your mouth. That, in turn, means you are inhaling more air and more particles, which are getting deeper into your respiratory tract.

We all know that exercise is essential for our mental and physical well-being. It even boosts our immune system. So, get out and exercise. But social distancing becomes even more important when we are exerting ourselves. Bottom-line: do not exercise near someone with whom you wouldn’t share a glass of water. Especially don’t run behind them. If you have no choice but to be behind them, give them 20 feet. Otherwise, you are literally sucking in their exhaust fumes. 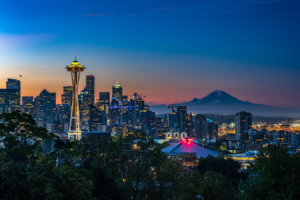