As we head into Memorial Day Weekend on the heels of a Friday with 1,200 new deaths from COVID-19, we are mired in arguments about how to turn the economy back on and are wondering if we had subscribed to Sweden’s hands-off policy all along. I have the nagging feeling we are asking all the wrong questions. We should not be looking to Sweden for guidance. We should be wondering how to be more like Vietnam.

The Asian success with COVID-19 has been clear for more than a month and can be seen in the two graphs below. Look at them carefully. In the first graph you have total COVID-19 deaths for China and its neighbors. Note that all of them (with the possible exception of Japan) have flattened their curves. China was clearly harder hit than its neighbors, but the disease appeared there before it even had a name and it is astonishing that they managed to control it as well as they did, given they were building the airplane as they were flying it. A recent study estimated that China would have had more than 25 million cases and hundreds of thousands of deaths had they intervened less aggressively. The other countries of Southeast Asia had the advantage of being able to watch and learn from China’s struggles and prepare for a viral invasion. As a result, Japan had 796 deaths, South Korea had 266, and Taiwan had 7. Vietnam had none. Now look at the second graph. The entirety of the first graph collapses into a tiny corner of the second. Dwarfing it all is the curve for the US, the country arguing about going to the bar to celebrate Memorial Day.

So how did Vietnam do it? Two papers, just released, offer a clue. A Chinese study observed that 99.5% of people entering the Wuhan wet market during the course of the pandemic were wearing a surgical mask. In Vietnam, according to a recent survey, 99.7% of respondents reported wearing masks during the pandemic. These data suggest that universal use of masks may have played a key role in limiting the spread of SARS-CoV-2.

In other words, our guidance from the CDC might have been completely wrong about masks.  Largely driven by the fact that we didn’t even have enough masks for health care workers, even my own posts suggested that grocery shoppers didn’t need masks. This was also driven by the relative ineffectiveness of masks at protecting the user. The missing piece is that masks are extremely effective at protecting others. So, one of the ways that Vietnam and China succeeded is by protecting each other, something lost in the cult of selfishness emanating from the Oval Office.

The other dramatic difference between Asian countries, particularly Vietnam, and the US is in our testing practices. Epidemiologists have long understood that the most effective ways to control an outbreak is to rapidly identify and isolate new cases and their contacts. But you can’t isolate cases if you don’t know they exist. If you impose strict limits on who can get tested, which we did until recently because of inadequate testing resources, you will miss many, perhaps most, cases. Waiting until someone has a persistent cough AND a high fever before you test them means you have allowed them to spread the disease for days.

Test early and often. One way to evaluate the adequacy of your testing is to see how often you have a positive test. The graph below from May 5 shows the number of tests that were conducted on that day for every one case identified. Taiwan and New Zealand, two of the most successful countries in controlling the pandemic, tested over 140 times for each case they identified. That same day Vietnam tested almost a thousand times for each case they found.In the US, one in six tests turned up positive.  If you put out six mouse traps and catch one mouse every night, you can be sure there are lots more foraging through your cupboard.

As for the opposite extreme, which is the Swedish strategy, their testing rate is essentially the same as the US and the UK, but, given the fact that they are letting the disease run rampant in their population, the impact of undercounting could could be far worse. The scale of Sweden’s failure is obscured by the fact that they only have ten million inhabitants. Their count of 3,871 COVID-19 deaths may be less than China’s 4,638, but, when we take into account China’s population of 1.3 billion, the epic disaster of Sweden’s policy of no policy becomes clear. Their 389 deaths per million is more than 120 times the Chinese death rate. Hardly a howling public health success. Surrender as a strategy just seems foolish and dangerous.

There is no proof in these data. Perhaps, this is just an ethnic difference in susceptibility, but that would make New Zealand hard to explain. The universal use of masks and aggressive testing in countries that have succeeded in containing COVID-19 does not mean that those interventions were the reason for that success. But their strategy definitely seems worth a try.

In the meantime, for those of you who remain convinced that we have the best testing policy in the world and masks are for losers, party hard this weekend. Whether you’re headed out for the beach, booze, or beatitudes, be sure to act Presidential and leave the mask at home. 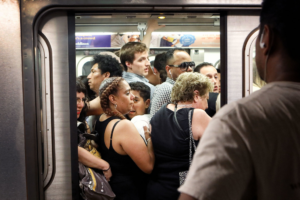