On April 20th, I sent this plan for putting Washington back to work to all of Governor Inslee’s senior staff. I got no response, so I thought I would just post it here.

As epidemic curves fall in response to the strict lockdowns, the new challenge facing government agencies here in Washington, around the country, and around the world is getting people safely back to work. Testing will, of course, play a key role in doing that, but the lack of adequate testing supplies has constrained our ability to act. I would like to propose plan that should allow most workplaces to return to normal activity with a minimal expenditure of resources.

To date, we have relied on the necessary, but incredibly inefficient approach of placing the entire population in quarantine because we didn’t know who was infected. The advantage of this plan is that it will identify those who are infected while they are still asymptomatic and isolate them in a way that minimizes the chance of further spread. In other words, it quarantines the infected and those most at risk of infection.

This protocol will need to be adjusted and adapted to the specifics of each workplace. For those that do not have direct consumer interaction, such as manufacturing, energy, financial services, information technology, and research, the focus would be on regular, pooled workplace testing as described above. Consumer facing businesses, such as grocers, personal services, and retailers, an additional component of consumer-retail tracing would be required to contact customers. A cell phone app could be developed and introduced to track the businesses entered by a cell phone owner and let them know if there has been a positive test at any workplace they have entered. If so, they can be tested and, if appropriate, quarantined.

This approach will allow a relatively normal return to work for a large fraction of the economy and can be maintained until a vaccine has been developed. Anti-body testing, as it becomes available, can be introduced with a goal of testing the entire population. This could allow those with positive antibodies to be excluded from pooled testing and to work without a mask.

For many reasons, it is essential to restart the economy as soon as possible. This approach provides a framework for allowing that to happen with constant active surveillance that will ensure that emergent cases are identified rapidly and only those who are infected or at direct risk of becoming infected will be quarantined. In other words, this approach provides a way to isolate only those who truly need to be isolated and will catch them early in the course of the infection to minimize risk of asymptomatic spread. We can save lives by prevention without destroying lives economically. 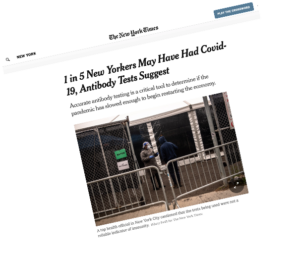 My Interview on Pacifica Radio